Having a population of more than 12,000, Market Drayton is the third largest market town in Shropshire, and is within easy reach of Crewe, Nantwich, Chester, Stoke on Trent, Stafford, Wolverhampton, Telford, Shrewsbury & Wrexham.

Just 15 miles from the M6 and 20 miles from the M54, Market Drayton has easy access to a range of major cities, including Birmingham, Manchester & Liverpool. The town is within 40 miles of 4 international airports, five world-leading research intensive Universities and a population catchment of more than 10 million people – with none of the pollution, traffic or stress of city working. All this places Market Drayton in a prime business location without the hassle and costs of more urban areas. 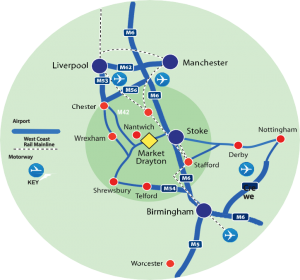 The town is full of historic character and charm, making it an important tourist destination for Shropshire’s 10 million annual visitors. This, combined with its strong enterprise culture, and stunning local amenities such as Hawkstone Park Golf Club (recently voted one of the best Golf Courses in the world) creates a truly desirable place to live, work and visit.

The town is home to a wide and vibrant range of businesses from small independent shops, food and drink manufacturers supplying national retail chains, the long established major employer – Pork Farms (Palethorpes), the rapidly growing Joules Brewery to high-value precision manufacturing and Research and Design businesses. The town has also proved to be the perfect location for large and iconic brands such as Müller Dairy & Culina Distribution.

All these businesses fit seamlessly into Market Drayton’s timeless townscape, including the beautiful 14th century church, the Shropshire Union Canal, and the iconic Buttercross which is still the focal point of the town’s vibrant Wednesday street market which in itself is regarded as one of the best in the region.

All this combined with Market Drayton’s proximity to a multitude of tourism and leisure sites to offer an unrivalled potential for a harmonious work-life balance.

Market Drayton is a wonderfully compact town lying almost completely between the River Tern (a subsidiary of the Severn) and the A53 bypass to the north. Within those boundaries is a core of attractive historic buildings, a wide variety of retailing mainly in the centre, some light industry, and a good selection of housing stock. The Shropshire Union canal runs through it from north to south. It is situated in a predominantly rural area in the north east of Shropshire on the border with Staffordshire; a few miles to the north is Cheshire. This is a location which has given rise to the names of the town’s main shopping streets: Shropshire Street, Cheshire Street and Stafford Street. It has a Town Council and Shropshire Council is the local authority. The population is around 12,000.

It is easy to see why Drayton’s first settlers chose to raise their church on this red sandstone precipice above the River Tern around the year 950AD. It could be easily defended and had access to water and arable land all around. The ‘dray’ element of the town’s name is related to the word ‘drag’ and suggests that it was known as a place where either boats had to be dragged over an obstruction or carts dragged uphill. Local historian Peter Brown inclines towards the second interpretation. Whatever the origins of the name, we assume these first settlers were Saxons because it is a Saxon name; a Roman road ran along the route of the A41 between Stoke Heath and Tern Hill but no evidence has come to light of any Roman or British (Celtic) occupation at Drayton itself.

Great Drayton and Little Drayton (the western portion of the present-day town) are listed as separate ‘manors’, or estates, in the Domesday book of 1086, William the Conqueror’s survey of the lands he had conquered. The manor of Great Drayton had been awarded by William to the Abbey of St Evroul in France who was leasing it to William Pantulph of Wem at the time of Domesday.

St Mary’s Church at Great Drayton commanded a parish far in excess of the manor in which it stood, taking in not only Little Drayton but a large area straddling the Shropshire-Staffordshire border. Despite its name, ‘Great’ Drayton is thought to have contained only a handful of cottages, so a geographically large parish would have been necessary to maintain its church living. The parish lay in a still wider area called “Hales” which has led to Market Drayton sometimes being called Drayton-in-Hales.

The sparse inhabitants of the surrounding manors in St Mary’s parish would have tramped the same routes on Sundays and holy days to worship at the church, and these became known as church ways. Longslow Road is an extant example. Parishioners would have also used days of worship as an opportunity to barter goods in the shadow of the church, and from this practice we can trace Drayton’s role as a market town. The practice seems to have been common across Europe because in 1201 the Pope issued an edict banning trading on church property, concerned that his flock’s attention was being diverted from higher things. In 1112 the manor of Great Drayton was given to the monks of Combermere Abbey north east of Whitchurch (Little Drayton was controlled by Shrewsbury Abbey).

The monks sought to formalise Drayton’s role as a trading station and thereby assure themselves of a handsome income. Markets were the chief means of distributing goods and bringing buyers and sellers together in medieval society; the rights to hold them were a source of great wealth and jealously guarded. New markets were in the gift of the King, and the Norman monarchs, both to reinvigorate the economy and more importantly swell their own coffers, set about establishing them with glee. In 1245 Henry III granted Combermere Abbey a charter to hold a weekly market in Drayton on Wednesdays and a fair on the feast of the nativity of the Virgin Mary in September. The market prospered and saw off challenges from other would-be market towns such as Betton and Adderley. Drayton probably came by the epithet ‘Market’ as a publicity stunt to assert its dominance over other towns.

There is a reference to Drayton as a ‘borough’ in 1292 which usually indicated a settlement with special rights such as a degree of self governance, although there is no indication that it had “burgesses” in residence, usually the sign of a borough. The residents appear to have been of lower station, but still would have brought to the town specialist skills that would have stimulated trade. They occupied long and narrow plots fronting the main commercial streets which equate to the modern-day Cheshire Street, Queen Street, Shropshire Street and Stafford Street. Banned from the churchyard, it is assumed the traders established their marketplace in a wide street covering the area where Cheshire Street, Queen Street and High Street now are. Thus the original market street would have been easily wide enough to accommodate livestock as well as other produce.

In this case, the buildings that stand between these streets would be, in town planning terms, infill, although it has also been suggested that the streets could have simply been added one by one as the town grew in which case the market might actually have started where High Street is now. As well as agricultural connections, Drayton has amassed a series of military connections over the ages. In 1459, the first battle in the Wars of the Roses was joined at Blore Heath (on the road to Loggerheads). The Yorkist Earl of Salisbury trounced the Lancastrian Lord Audley, who had been sent to arrest him, and destroyed his army. The hill where Salisbury camped is called Salisbury Hill. There were several skirmishes in the town during the Civil Wars of the 17th century, and Tern Hill Barracks have been here since the First World War. After the dissolution of the monasteries, the lordship of the manor was sold to Sir Rowland Hill, a London textile merchant and previous mayor of the city, who went on to found Market Drayton Grammar School in 1555, and in 1562 it passed by marriage into the Corbets of Adderley.

By the 17th century, Drayton was a prosperous town made up predominantly of half-timbered buildings, many of them with thatched roofs. Then disaster struck. In 1651, 15 years before the Fire of London, Drayton had its own great fire. Most of the buildings were destroyed – a rare survivor from before this time is Cotton’s House on Shropshire Street, built around 1600. The town had to be rebuilt, and half-timbered buildings such as the Cheshire Cheese Inn (now Mincher-Lockett opticians) at the Buttercross became rare. Evidence of the continued prosperity of the town, however, are the many fine brick houses dating from the Stuart, Georgian and Victorian periods. A sign, too, that the market was never forgotten is the Buttercross market shelter which replaced an actual cross in 1823.

The 19th century was a period of great expansion in communications. In 1835 the Birmingham and Liverpool Canal was built past Drayton, carving one of the deepest canal cuttings in the country through red sandstone at Tyrley Locks. Later part of the Shropshire Union Canal, it has gone through a revival as a major leisure resource. In such an isolated place as Market Drayton it is difficult to imagine there was once a railway station here. Lines from Drayton to Stoke, Nantwich and Wellington were built during the 1860s. It was soon after this that the cattle market was moved from the centre of town to Maer Lane in order to be near the station. (The market is now on Western Way and is one of the most successful in the UK).During the second half of the 20th century the population expanded greatly. The A53 bypass has now neatly defined a northern boundary for the town, but as development land within the parish boundary becomes ever scarcer, the development pressures to build beyond its boundaries will become intense. It is to be hoped that the good sense that has succeeded in managing the town’s development so well in recent decades can be maintained.